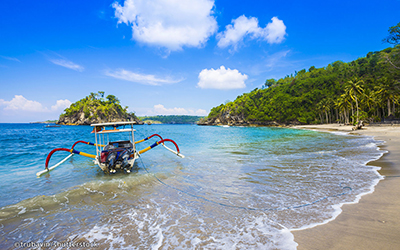 Nusa Penida is the largest of three islands off the southeastern coast of Bali, the others being Nusa Lembongan and Nusa Ceningan. Totaling some 200 square kilometers.

Nusa Penida is much larger than the better known Nusa Lembongan. However, tourist infrastructure is very limited here but growing fast.

Due to a lack of natural freshwater, little is grown or produced on Nusa Penida, and even some basic foodstuffs come in by boat.

Visitors should therefore expect higher prices than in Bali, and not bank on any tourism-related luxury items being available for purchase.

Nusa Penida has also become an unofficial bird sanctuary for endangered Balinese and Indonesian bird species, including the critically endangered Bali Starling (Leucopsar Rothschildi). In 2004 the Friends of the National Park Foundation (FNPF) started an introduction program onto Nusa Penida of the near-extinct Bali Starling. Over 2 years from 2006, 64 birds were released into the wild. By the spring of 2009, 58 chicks had successfully hatched in the wild and in 2010 there were estimated to be over 100 birds. As with many similar release bird projects in the West Bali National Park that have failed because of poachers, this has been a bit more successful in preventing the Bali Starling from becoming extinct. The local Nusa Penida population actively protects the birds. In 2006 all villages unanimously passed a local regulation making it an offense to steal or threaten the life of the birds.